Escaping the Spookhouse: HAUNT and the Lingering Trauma of Abuse

I’ve mentioned before that I’m embarrassingly susceptible to jump scares, but I didn’t realize until recently why I leap out of my seat even at the most obviously telegraphed of frights. I have complex post-traumatic stress disorder, which counts among its symptoms hypervigilance and the tendency to startle very easily. That means that when I watch a horror movie, I’m always scanning the frame for danger, but I’m never prepared for it when it inevitably arrives.

Being so easily startled, I hate haunted houses. All caps, bold letters, HATE them. Which is ironic, given that my favorite subgenre in all of horror is the haunted house story. Maybe I like being able to exorcise my fears in a controlled setting — after all, I can always pause a movie if my anxiety spikes too much (as I recently had to do several times with the stellar Terrified). When I’m watching a film or reading a book, I’m the one with the power to close my laptop or put down my Kindle and walk away. I decide what happens and when it happens. But in an actual haunted house — “actual” in the sense that you pay to walk through a set while actors jump out and scare you, not in the sense that malevolent ghosts want to eat your flesh and/or your soul — there’s no control. Anything can happen. The only guarantee is that at some point someone or something is going to menace you, and that’s not a certainty I can face without collapsing into tears.

So when I started seeing glowing reviews of Haunt on my Twitter feed, I got nervous. I really wanted to watch a great new horror movie, but I didn’t know how well I would handle the story of a group of college kids who visit a haunted house on Halloween night and get a much more harrowing experience than they signed up for. I fought back the nerves and fired up Shudder, though, and I ended up getting a much more harrowing — and rewarding — experience than I expected. Haunt isn’t “just” a solid slasher flick; it’s also a thoughtful exploration of abuse, trauma, and the painful ways we heal (or don’t heal) from our pasts. 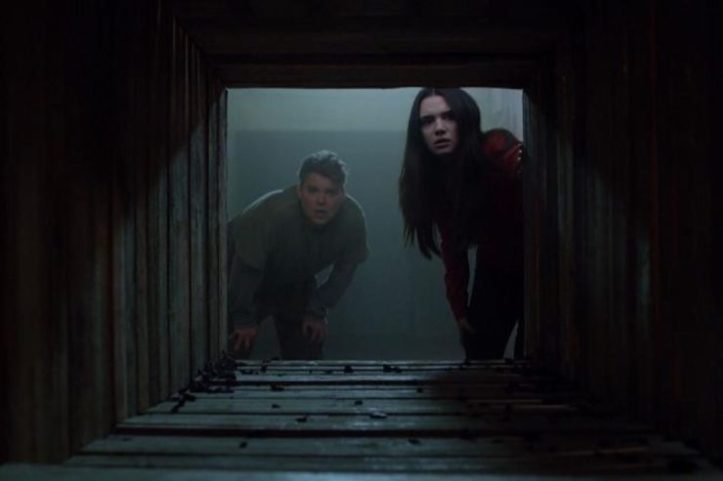 Written and directed by Scott Beck and Bryan Woods, the film follows college student Harper (Katie Stevens) and her friends as they party on Halloween night. Through flashbacks and a string of obsessive text messages, we see that Harper grew up with an abusive father and that her boyfriend continues the cycle of abuse by beating and stalking her. Her roommate convinces her to forget about her “drama” for the night, so they go to a club and then decide to visit a supremely sketchy haunted house. Ignoring the increasingly obvious signs of danger, the group signs liability waivers, ditches their cell phones at the door, and enters the Extreme Haunt. I won’t go into too much more plot detail, but it’s hardly a spoiler to note that the scares and the violence at this haunted house turn out to be all too real and that Harper and her friends must fight their way through the haunt to survive.

The movie isn’t always subtle about its themes — Harper explicitly states that she “grew up in a haunted house” as she flashes back to hiding under the bed as her dad throws her mom to the ground — but some of the parallels are more nuanced than others. Perhaps you have to have lived in a haunted house yourself to pick up on them. The terror of having your fears used against you is demonstrated as one girl’s arachnophobia is exploited in a horrible corridor of spiders. The awful lack of stability and predictability that you face in abusive situations — never knowing if the wrong word or just some hideous whim will set off a stinging rebuke or a torrent of rage — is reflected in each corner of the haunt, where spring-loaded skeletons and chainsaw-wielding actors are waiting to pounce when you least expect them.

The haunt’s claustrophobic layout mirrors (and exacerbates) the sense of imminent danger that survivors like Harper live with every second of every day. Trap doors are strategically placed to keep you off balance and isolate you. The game is rigged. You’re not safe, but you’re expected to laugh it all off as just a bit of fun. As the group runs into dead ends and tries to escape the “actors” who are far too eager to use those chainsaws, they realize that there’s no way out. They experience what is, for me, the worst aspect of abuse and its aftereffects: the feeling of being trapped — trapped by your circumstances, trapped by your own mind, and trapped by the mask you wear just to make it through the day.

If you strip away the heavier themes of trauma, identity, and survival, Haunt still works as a creepy, pulse-pounding horror film that’s perfect for Halloween viewing. The cast is engaging, and the characters’ actions are a terrific blend of relatable and infuriating. (Is there a German word for the delicious frustration of watching horror movie characters make the worst possible decisions that are all but guaranteed to get them killed? Goreschadenfreude, perhaps?) There are effective scares and enjoyable setpieces that will admittedly look familiar to fans of the Saw franchise but should nonetheless satisfy viewers who just want to watch some kids get hacked and slashed by masked baddies. Haunt doesn’t reinvent the slasher movie, but it has a hell of a good time with the existing tropes.

Haunted houses as metaphors for abusive relationships are nothing new in horror. But I found Haunt at just the right time and in just the right way that the movie’s treatment of this difficult subject got under my skin. It helped me gain a deeper understanding of myself and my relationship with a genre that I love dearly. I’m probably still never going to go within a hundred miles of a haunt, especially not one as obviously homicidal as the one that Harper and her friends visit, but realizing why these spookhouses affect me so strongly is an important step forward for me. I’ve lived in haunted houses before, but that doesn’t mean I’ll be trapped in one forever.