An expressionistic slow burn that is alternately sensual and sinister, Black Lake explores the legacy of sexual assault and the power of art to give voice to the dead. The loose narrative follows Aarya (K/XI, who also served as writer, director, editor, and cinematographer, among other credits) as she house-sits at a secluded Scottish estate. Hoping to find creative inspiration away from the noise of London, she relaxes and paints in the picturesque home. Her Auntie Ayaneh (Aditi Bajpai) sends her a gift from a recent trip to Pakistan: a beautiful red scarf that stands out amid the film’s otherwise subdued color palette. Ayaneh and Aarya both begin to notice odd noises and visions, and they soon realize that the scarf has brought a Churail into their lives: the vengeful spirit of a young girl who was raped and murdered in the Pakistani village that Ayaneh visited. 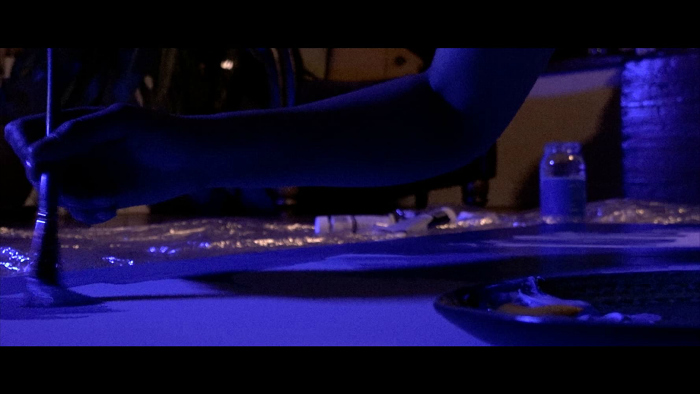 The film is light on story and dialogue, which is quite frankly for the best: the performances are stilted and the dialogue takes wild leaps of logic in order to advance the plot. K/XI excels at evocative imagery, though, and she wisely spends most of the film focusing on moody details: an overcast sky, branches obscuring the moon at night, the actors’ hands in motion, and a revelatory array of the different qualities of water. The final half hour (to call it the third act would be to assign a standard sense of narrative that doesn’t really exist in this film) features some truly disturbing imagery that simultaneously horrifies and fascinates the viewer.

Black Lake rewards patient viewing; there is something eerily beautiful and utterly compelling about this visual tone poem. It uses Pakistani mythology and the queer female gaze to call attention to violence against girls and women. Trauma from sexual assault is undying, coming back to haunt the characters in painful and unexpected ways. This unique and poetic film proves that art can both raise and pacify the dead, bringing light to the injustices they suffered in hopes of preventing future evils.