I have sad news to report, fiends: legendary voice actress June Foray died today at age 99. If you don’t know her name, I guarantee that you know her voice. From Disney’s Cinderella and Peter Pan to The Rocky and Bullwinkle Show to The Smurfs to The Powerpuff Girls, almost any cartoon you grew up with was graced with June Foray’s talents. She was not a voice actress, she was the voice actress.

I cannot overstate how much June Foray did for the fields of animation and voice acting, nor can I overstate how much I love her. As a kid I was a tiny little animation nerd, obsessing over voice actors and background artists when other kids had trouble keeping Donald Duck and Daffy Duck straight. I have worshiped June Foray my whole life. This is a horror blog, though, so instead of trying to do justice to her long, distinguished career, I am going to talk about a few of my favorite spooky characters voiced by this amazing lady. 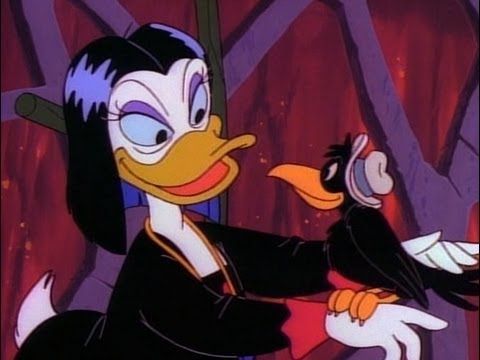 Magica is a powerful sorceress, created by Carl Barks to serve as an antagonist for Scrooge McDuck. When she’s not hanging out on a volcano, she is trying to steal Scrooge’s Number One Dime to use for nefarious magical purposes. June Foray voiced Magica on DuckTales, which was where I first encountered the character. Going back and reading Barks’s comic book work, I hear June’s voice in my head whenever Magica is on the page. The video below is wonky, but you hear Magica starting at about the 1:37 mark.

I have always been drawn to the sinister corners of Disney’s magical world – especially Maleficent, Ursula, and Mad Madam Mim – and with June Foray voicing her, Magica is definitely one of my favorite Disney witches. 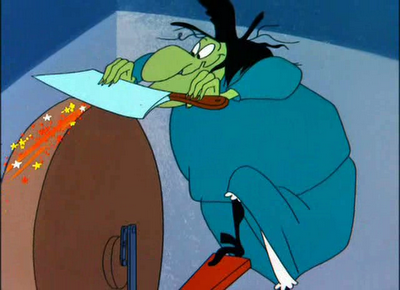 Obviously, I am a fan of spooky things. (Hi, I’m Jess, and this is my horror blog.) I think my earliest memories of loving monsters, witches, and all things Halloween come from watching Looney Tunes cartoons.

The shorts I loved most were always the ones with Gossamer and Witch Hazel. June Foray portrayed Witch Hazel as someone utterly delighted with her own unhinged malevolence. She is gleefully nutty, which makes her one of my all-time favorite characters.

“My name is Talky Tina, and I’m going to kill you.”

Foray’s voice work in this episode is wickedly creepy. Tina’s statements get more and more hostile, but her voice stays in that disturbing sing-song cadence, which makes her pronouncements of evil intent all the more terrifying. And that giggle? Dear Lord is that a creepy giggle.

June Foray’s voice is instantly recognizable, but no two of her characters sound exactly alike. For an actress with a career spanning more than six decades, that is a monumental achievement. We will never see another June Foray, fiends. But we can and should celebrate her work, so get ready to swim in your coin vault, bust out your cauldron, and travel to the Twilight Zone. Goodbye, June, and thank you for everything.